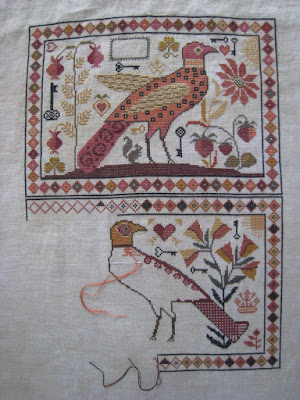 I've started work on Frederick proper. Progress is still much slower than I want but at least it's progressing forward. I'm pulled in so many directions right now it's crazy. I've starting tearing up my bedroom, on this past Wednesday I attended a long arm quilting class to learn how to use my sister's machine and she wants me to start finishing a million tops and tomorrow Isibeal restarts agility training. I don't have nearly enough time in the day. It's hard to pick and choose.

This weekend though will be about agility, home repair and quilting. Doubt I get any stitching in at all.
Posted by Margie at 9:44 AM 17 comments: Links to this post 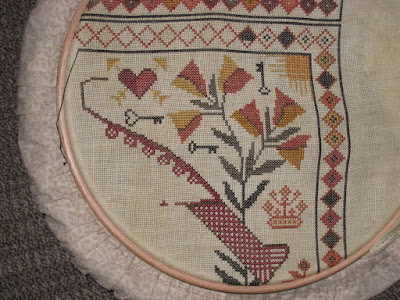 I can almost tell Frederick is a bird. :-) Hopefully by the end of the week I'll have at least his outline in place. I'm finally feeling better - on Friday I got out of bed and knew I was going to live. I ended up being sick for more than two weeks. Isabelle is very happy because that means her trips to the dog park are happening again with some frequency. The pugs are sad because now they can't lay all over me all day long.

I'm finally in a position to start work on my bedroom! Below is the first picture of the fruits of my labor. It took the entire weekend to sort, toss and move around to other parts of my house / garage everything that landed in the bedroom since I moved in last September. I should have taken a before photo. The floor was so full I had a path to get around. I'll start the "official" demo on the 3rd of March when I have help but I'll start doing some little stuff before then - like taking apart the closet and starting demo on the bathroom. The goal is to have me sleeping in the room by the end of April. Very doable if I don't find a ton wrong with the walls once they are taken down. Cross your fingers for me that this will be fairly simple. I know I have a bit of a leak on the roof in a corner - hopefully it will be an easy fix. And I can't replace the windows yet because I want to do the entire house at the same time I replace the siding and that can't happen until I can get a home equity loan. Maybe this year, maybe next year. :-) 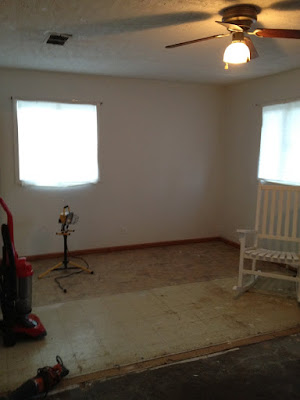 Posted by Margie at 9:52 AM 7 comments: Links to this post

out and down for the count

So much for the new plan! I've been sick as all get out for almost two weeks now. It started simply enough with the flu two Wednesdays ago and then progressed to a sinus infection. The flue was bad enough but the sinus infection put me on my back. Oh my I've been miserable. So not a lot of stitching or sewing has been done at my house. 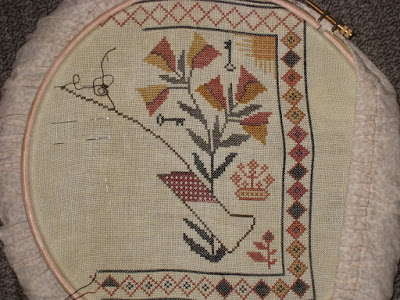 Here is my progress on Frederick. Not much and not nearly what I was hoping for. I did find some time however where I felt reasonably well to sew and I got my kitchen and dining room valances finished. And I love how they look! The brick gimp really set them off like I was hoping. 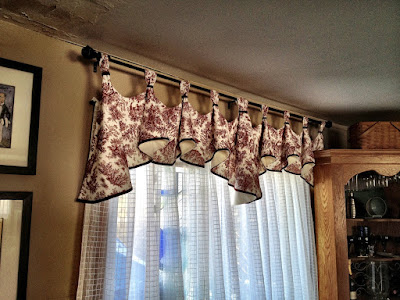 I love how the two look together. Really ties the two rooms together. I have a ton of red and cream French General quilt fabric and I'm going to make some table runners. I still need to move the three pictures on the wall over a bit but I'm waiting until I have help. I don't want to fix more holes than I need to. :-) 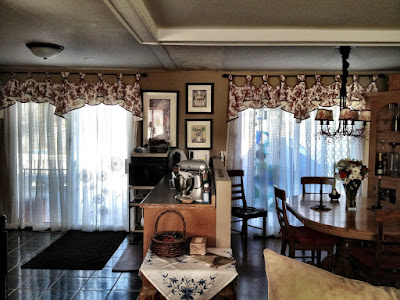 I have fabric for the two living room windows. Right now there are just sheers on them and I'm really tired of people walking or driving by at night being able to see all the way in. It's not my favorite but it was free. My sister hit a huge sale at Hobby Lobby and scored 16 yards for $7.00 a yard. The stuff was originally $36.99. It's a floral on a mostly reddish brick background but a tad "fancier" than I like. But the price was right and I'll have more than enough to do floor to ceiling drapes. I might or might not be able to replace those windows this year and I've got to have something in the meantime. It's ok enough for right now. I still need to pick up the lining and I'm working on ideas for a matching valance. Something much more simple I think for the living room.

Thanks for stopping by!

Waiting in the Wings